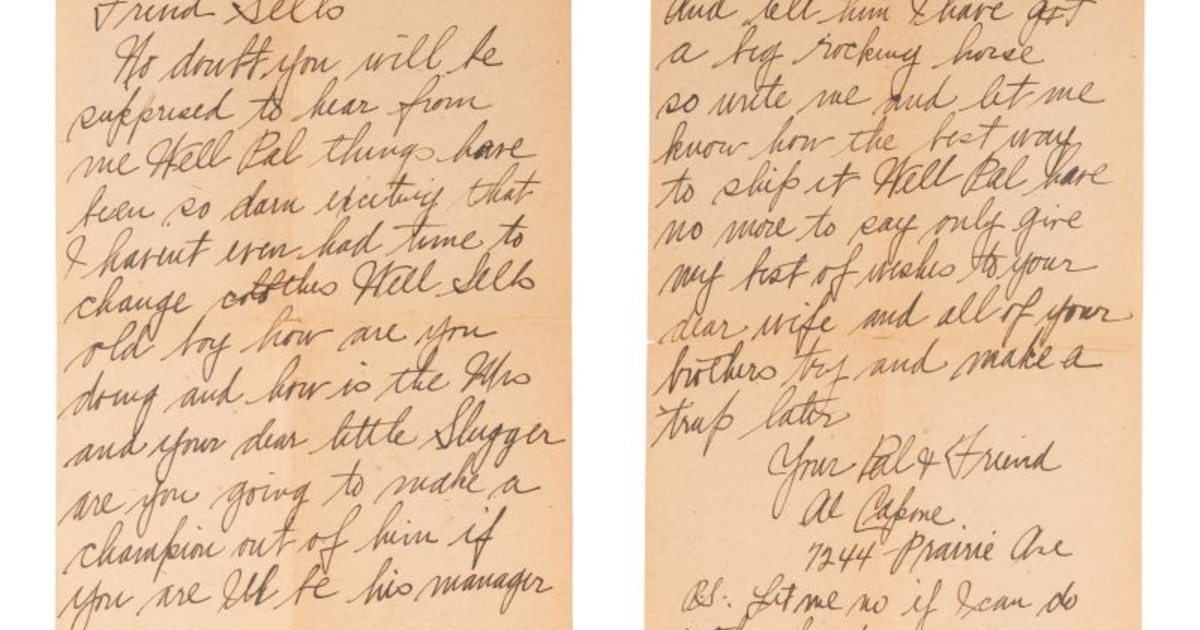 This is the first time that these letters, written by Capone to his friends, will be on sale. The letters stayed in his family for generations and will finally be available to the public, according to Hindman.

“We know of no examples of Capone’s letters coming to market from this period of his life, when his influence on organized crime in Chicago was at its height,” said Gretchen Hause, vice president of Hindman and senior specialist in books and manuscripts. in a report.

Some of the items have a minimum bid, which will not be disclosed until the auction.

The letters were written at different times and each has a different expected price range. In a letter Capone wrote from Cicero in 1924, he tells his friend Bill Sells to find a smuggler he wants a large order from. The letter has an estimated auction price of $12,000 to $18,000.

Another letter with an estimate of $10,000 to $15,000 which was written two days after an assassination attempt on Capone in January 1925 states, “Well things have been so exciting that I haven’t had the time to change clothes.” The message came after North Side gang members attempted to assassinate Capone while he was at a restaurant on the South Side of town.

The final letter, written in 1929, contains details of a real estate survey in Wisconsin where Capone and his brother would later own homes. The letter is estimated to sell for between $3,000 and $4,000.

Along with the letters, Hindman will also auction off a Colt M1892 New Army & Navy revolver, estimated at $5,000 to $7,000 and believed to have been used by Capone. Memorabilia including photos, negatives and matchbooks of Capone will also be available at auction and are expected to sell for prices ranging from $800 to $1,200.

Last year, three of Capone’s granddaughters held an online auction for items including his “favorite” .45 automatic handgun and a letter from prison written to his son.

Bidding for the Letters and Artifacts begins at 9 a.m. Nov. 9 at Hindman’s Chicago auction house, online through their digital auction room, and through an absentee auction and telephone.