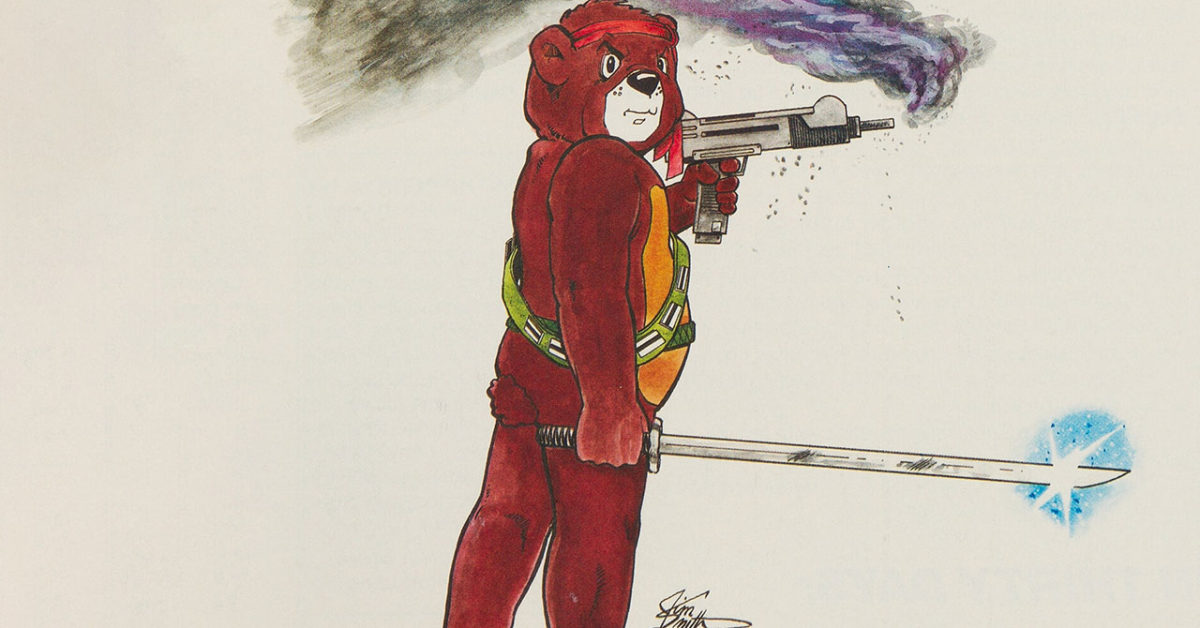 Publisher and Founder of Dark Horse Comics Michael Richardson explained the thought behind Boris the bear, in an editorial of the first issue. “Just a few years ago, a comic called Teenage Radioactive, Blackbelt, Mutant, Ninja Critters would have raised an eyebrow or two. More than a few laughs would probably have followed. Today, the same title would more than likely elicit a groan sickly. After the original radioactive animal parody group appeared, the concept was copied, re-copied, used and re-used. Every month it appeared that the well was finally dry, that there could be no d another publisher ready to publish another poorly done book on an assortment of turtles, mice, hamsters, kangaroos, gerbils, rabbits, penguins, etc. Every month another half dozen titles were copied announced. ENOUGH is ENOUGH!”

Richardson, with Randy Stradley and James Dean Smith would channel that sentiment into a rather vicious satire in a seriousness that would become the company’s second comic book title. There’s a high-quality copy of the beginning of a series that both captured and trashed the mid-1980s indie comics zeitgeist with Boris the Bear #1 (Dark Horse, 1986) CGC NM+9.6 White Pages up for auction at Heritage Auctions Sunday & Monday Selective Comics Auction September 4-5, 2022 #122236.

“Now be warned, some may think this book is too violent, but we wanted there to be no mistakes,” Richardson noted. “When Boris kills them, they stay dead. If you like your heroes being punched through buildings, shot and stomped on to get back up unscathed and hurry off to tea with Aunt Matilda, this is NOT the book. Isn’t it ironic that a satirical, fun, animalistic approach to violence feels closer to reality than the standard, nonsensical punches so prevalent in today’s comics?

On the contrary, Richardson underestimated what was going to happen in Boris the bear. In the first issue alone, Boris does indeed brutally slaughter parodies of Usagi Yojimbo, Cerebus, the Tick, the teenage Radioactive Black Belt Hamsters, and the Teenage Mutant Ninja Turtles, among others. The original run would run from 1986 to 1991. A comic book moment from the 1980s, there is a Boris the Bear #1 (Dark Horse, 1986) CGC NM+9.6 White Pages up for auction at Heritage Auctions Sunday & Monday Selective Comics Auction September 4-5, 2022 #122236. If you have never bid on Heritage Auctions before, you can get more information, you can check out their FAQ on the bidding process and related questions.