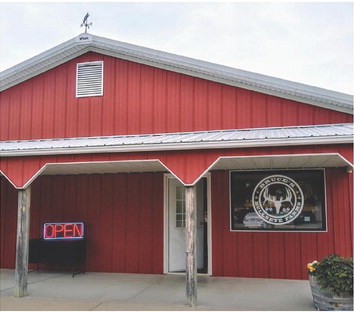 Laurie Bruce and her husband Joel founded Bruce’s Bullseye Farms in 2017 out of their kitchen. Laurie tried her luck with her homemade produce at the farmer’s market where she sold and started ever since. Making Leon their first retail store, the Bruces are eager to do business in the rural community, and more.

“We are a first generation farm, between Augusta and Leon. I started with value-added products, like sand plum jelly and pumpkin bread 5 years ago. I had outgrown my house, so we thought of a building on a farm, but saw that building was for sale just over a year ago. It used to be the offices of an auction house and we have completely renovated it into a commercial kitchen. We moved in about a month ago and have just started,” Laurie said.

Located at 112 N Main in downtown Leon, you can find Laurie there most days cooking, canning, and packaging produce to sell at local farmers’ markets like Derby, Augusta, Kechi, Hillsboro, and El Dorado as well as in the store itself. Although the store does not yet have regular hours, the couple plans to open the store during regular hours in November and December for the holidays.

Laurie is a first-generation graduate of Wichita State University with a teaching degree and has taught at Butler County Community College (BCCC) and Bluestem Schools. She is currently an adjunct teacher in culinary mathematics at the BCCC and assists visually impaired students on campus. Joel is a full-time inspector for the Kansas Gas Service and helps Laurie most nights in the kitchen as well as running the farmer’s market stalls on weekends.

Looking to the future, Laurie and Joel hope to put the focus back on the farm to grow more produce and continue to expand product choices.

“What we would like to do is have an employee who can help me with what Joel is already doing, but during the day it would help to make a lot more product since Joel can’t help until the evening. This would allow Joel to focus on the farming aspect and augment the cattle herd we already have,” Laurie said. “Really, what we would like to do is grow what we can. For example, I want to grow green beans and then pickle them as well. I would also like to make and sell bierocks, but I hope to defer a little because the beef from bierocks will be born on our property, processed at Walnut Valley Packing, and then created in our kitchen.

If you want to buy Bruce’s Bullseye Farm products, go to their website at www.brucesbullseyefarms. com to order online for pickup, contact the team on their facebook page or call them at 316-841-1592. You can also catch them at the El Dorado Farmer’s Market on Sundays.