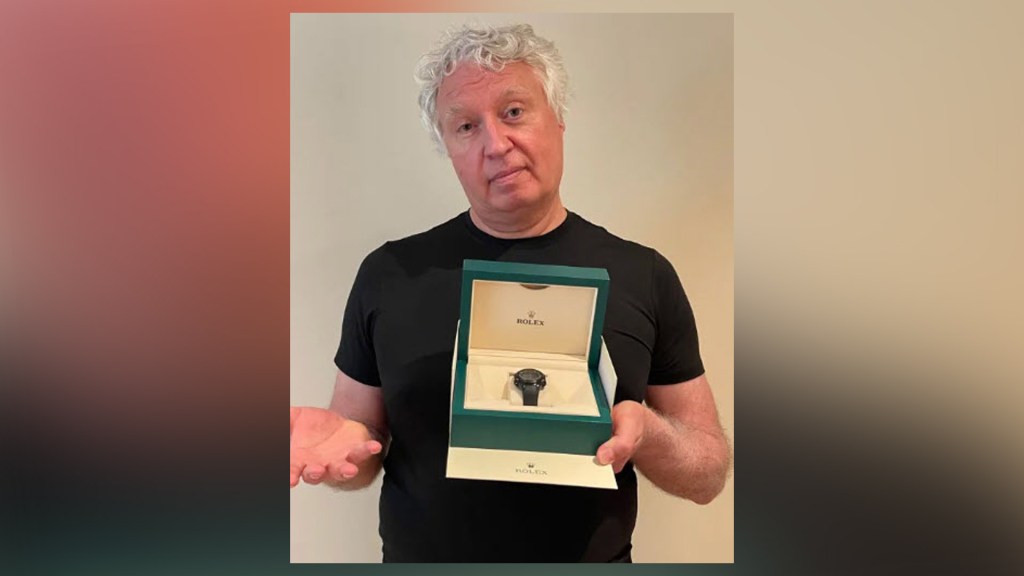 Dr. Gregory Baran was full of anticipation on a chilly Thursday in December 2021 as he carefully opened the small package delivered by a FedEx driver to his medical office on the outskirts of Kingston, Ont.

Baran had purchased an 18-karat gold Rolex Pearlmaster watch for nearly $27,000 three weeks earlier from 3 Kings Auction, an online business based in Redondo Beach. He planned to surprise his wife, Julia, with the expensive watch on their upcoming wedding anniversary.

“The Rolex is a work of art and I wanted something she could use,” Baran, 59, explained in a phone interview. “It was the least I could do for her after 35 years of putting up with me.”

However, when he opened the box engraved with the Rolex name, he was immediately struck with disbelief.

“Inside the box was an inexpensive black sports watch that you might find at Walmart,” Baran said in a phone interview.

Julia Baran, 60, was even more direct about her disappointment.

“I’m flabbergasted that what was in the box was not what was written on it,” she said. “I am terribly disappointed that someone is taking away the joy of celebrating our 35th wedding anniversary.”

A woman who answered the phone earlier this week to 3 Kings said she personally packed and shipped the Rolex and stood by her decision not to reimburse Baran or provide him with another watch.

“We have proof that we shipped the correct item,” said the woman, who declined to be named.

Pressed for more details, the woman told a reporter from the Southern California News Group to contact 3 Kings’ attorney, but declined to provide that person’s name or phone number.

According to the 3 Kings website, the auction house has been in business for over 25 years and specializes in diamonds, gemstones and fine jewelry.

Baran, an avid antique collector, came across the Rolex while browsing LiveAuctioneers, an online platform that hosts real-time auctions.

Over the years he spent hundreds of thousands of dollars on various items purchased through LiveAuctioneers and never had any issues until the Rolex mess. LiveAuctioneers is currently investigating Baran’s complaint. The doctor thinks that LiveAuctioneers could have done more to solve the problem and maybe should have suspended 3 Kings.

The day after winning the auction, he received a boilerplate invoice from 3 Kings along with instructions to transfer funds to the company’s Wells Fargo account. He was also informed that the Rolex could take three weeks to ship due to the COVID-19 pandemic.

Although he didn’t know it then, the delay was the least of his problems.

Immediately after receiving the sports watch instead of the Rolex, Baran began bombarding LiveAuctioneers with emails asking for updates on efforts to get his money back and expressing growing frustration that the issue was not resolved. .

“They offered to refund me if I returned the watch I purchased but never received,” he said in an email to LiveAuctioneers. “Therefore, I am left to believe that this was a deliberate and fraudulent sale.”

In another email to LiveAuctioneers, Baran noted that the same Rolex he purchased from 3 Kings on Nov. 12 was resold by an affiliate, Golden Gate Auctioneer, less than a month later.

He also included screenshots from the LiveAuctioneers website showing that the listings for both watches had identical photos, descriptions and serial numbers.

LiveAuctioneers has repeatedly pushed 3 Kings for details about Baran’s shipment, with a customer service representative advising the company in an email: “We urge you to investigate this matter further as this bidder has a consistent record of 10 years with no problems with an auction house.”

Neelam Jethva, vice president of operations at 3 Kings, did not budge.

“I think this customer is not honest because I packed the Rolex watch and dropped it off directly at FedEx,” Jethva said in an email to the LiveAuctioneers representative. “We are deeply upset that this client is misrepresenting us.”

“How handy to have someone who absolutely remembers packing and shipping this particular watch when he sells hundreds of them a month,” he said. “There is no way to prove that the correct watch was sent.”

Jethva also explained how the same Rolex could have been listed at two different auctions less than a month apart. “The second listing on Dec. 8 must have been a mistake,” she told LiveAuctioneers. “We have shipped the watch to this bidder and removed the item from our inventory.”

Too costly a trial

Still, Baran remained determined, consulting with a Los Angeles attorney about his options. However, he was advised that pursuing a civil lawsuit against 3 Kings would likely cost upwards of $100,000. Baran also reported the incident to the Better Business Bureau and a skeptical Redondo Beach police detective, who speculated that he may have turned off the watches himself.

Redondo Beach police did not respond to requests for comment on whether they were investigating the issue.

In the end, the doctor who had simply wanted to give his wife an expensive and romantic gift decided there was only one thing he could do.

“I was heartbroken that my plans had failed, so I bought a similar watch from Canada,” Baran said. “My story had a happy ending.”