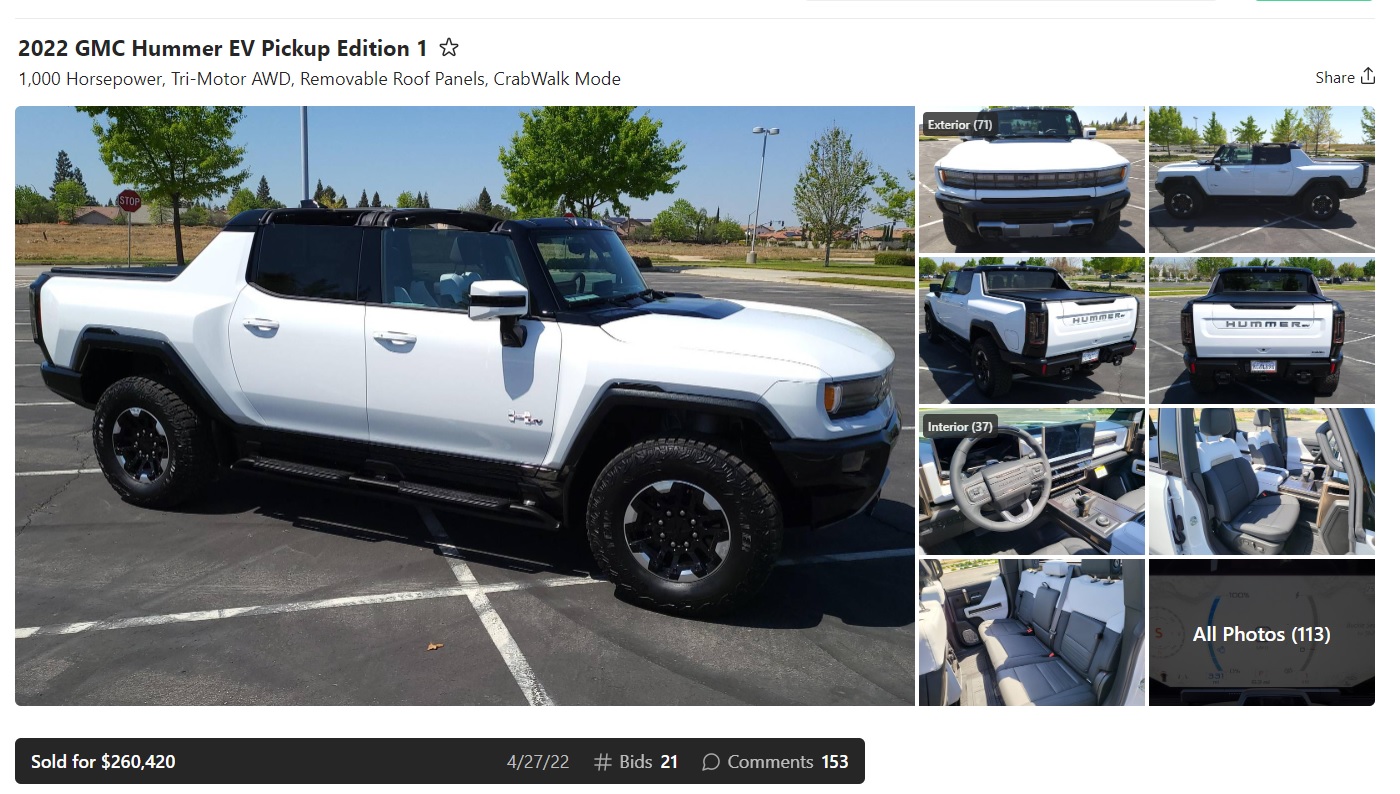 Owners are now taking delivery of the first Rivian electric trucks, but they’re not keeping them. Several Rivian R1T electric trucks appear on auction websites like Cars & Bids, eBay and Bring a Trailer for a huge bounty. How much of a premium? Almost double the purchase price in some cases. You can place a bid today for a 2022 Rivian R1T Launch Edition truck, but his bid is already over $100,000. With two days to go.

The Rivian R1T is a hot, hot truck

Rivian electric trucks are the most popular electric vehicles today. It’s the first electric pickup on the market, and although they’re rare, Rivian has beaten Ford and Chevrolet to the punch. Demand exceeding supply is one of the reasons why they are expensive on auction sites.

The R1T is faster than a Corvette at 60 miles per hour. It has a faster charging system than Teslas. It can be ordered as a four-engine, four-wheel-drive truck with off-road chops. It looks good too. Unfortunately, as the company attempts to ramp up production, there are thousands more orders in the queue than trucks available.

Rivians aren’t the only trucks making big money at auction

The Rivians aren’t the only trucks that command a bounty at auction. At Cars & Bids, two 2022 GMC Hummer EV pickup trucks recently sold for $260,420 and $235,000, respectively. That’s Lamborghini money for a truck that sold new for $112,595. Sure, the 2022 Hummer EV has 1,000 horsepower from three motors, four-wheel drive, four-wheel steering in CrabWalk mode, and can hit 60 miles per hour as fast as most Lamborghinis, but can haul four friends and a boat of towing at the same time.

How much do Rivian electric trucks cost?

Rivian electric trucks start at $67,500 for the base two-motor truck, according to the Rivian. But good luck finding one if you didn’t shell out $1,000 to reserve yours two years ago. The Explore is the base model, and it starts at $67,500 with the standard battery and a dual-motor package. Adventure is next and it adds better sound and a few goodies for $73,000. According to Rivian, Adventure and Explore trucks are available.

The one everyone wants, however, is the Launch Edition. The Launch has four motors, one for each wheel for true all-wheel drive, and a host of special Launch Edition options. Launches are easily identified by the Launch Green paint job and the 20- or 22-inch wheels. The R1T was named Truck of the Year by MotorTrend.

The company reported about 83,000 reservations at the end of 2021 and plans to manufacture 600,000 vehicles at its two factories. But, in March, the company only produced 2,425 trucks and said it had delivered 920. That means many people are still waiting for delivery of the R1T or R1S, despite orders placed years ago.

Could the Ford F-150 Lightning be next?

Ford said it is now shipping F-150 Lightning electric trucks to dealerships. We expect the Lightning to become the next darling of auction sites as well. So far, Ford said, the company has ordered more than 200,000 F-150 Lightning trucks at $100 each. But, it has only produced 2,000 trucks so far. That means there’s huge pent-up demand for Ford’s electric vehicle.

The Lightning starts at $39,974 for the Pro, which is the work truck version. Ford is also playing in the luxury truck sandbox with Rivian and for $90,874 it will sell you a fully loaded Platinum version of the F-150 Lightning. In Ford parlance, that means you get everything, including the Pro Power Onboard system that lets you power power tools on the jobsite. Then you can ride home in Nirvana Premium leather seats and use all the tech packages Ford can add, all while being serenaded by a B&O stereo.