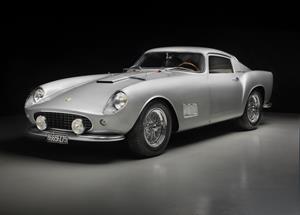 Detroit MI, April 29, 2022 (GLOBE NEWSWIRE) — Broad Arrow Group is delighted to announce the addition of the historic 1957 Ferrari 250 GT Berlinetta “Tour de France”, chassis 0619 GT (Estimate: $6,000,000 – US$7,000,000), at the Monterey Jet Center’s next auction will be held this August 18, 2022 during Monterey Car Week. The TdF represents one of the finest examples of its kind, with a known history from new and accompanied by its Ferrari “Red Book” Classiche certification.

When a sports car dominated a race and its class so convincingly throughout its early model years, it seemed only logical that this car model would take the name of the racing circuit if won. It was because of this absolute dominance that led to the christening of the svelte 250 GT LWB Berlinetta, the “Tour de France” – a name based on the series of victories united between a small group of drivers who raced their Ferrari TdF respective for victory from 1956 to 1959.

Designed by Pinin Farina, built by Scaglietti, the all-aluminum competition Berlinetta was simple yet stunning in design. It featured a long hood accented by covered headlights. The design was a work of art, it was deceptively fast, perfectly balanced and offered an abundance of performance.

Perhaps most impressive is the list of guardians of the 0619 GT, starting with its first owner, Pierre Noblet, who had skillfully raced his TdF in more than 10 different circuit races and hill climbs up to 1960. Noblet scored an impressive list of podiums during the period, including third and fourth places at Spa, Reims and Monza. Subsequent European owners damaged the car in road accidents (See Pourret, The Ferrari legend). In 1975, the TdF was found and rescued from obscurity by famed NART racing team mechanic, Ferrari guru and gentleman driver, Mr. Wayne Sparling.

As lead mechanic for Luigi Chinetti’s North American racing team, Sparling knew the ins and outs of almost every 12-cylinder Ferrari in existence and, when time permitted, he set out to return. its TdF to its former glory. He achieved this goal in the early 2000s and then began not only showing the TdF at events such as the FCA National Championships and the Cavallino Classic, but also driving the Ferrari at events across the country. After several years of enjoying the Ferrari to the full, in 2018 the TdF was acquired by the current owner, who reunited the car with its original bodywork and commissioned comprehensive and sympathetic repairs in Italy by GPS Classic in collaboration with QualityCars. The car was then submitted to Ferrari Classiche for Factory

Certification which she received in April 2021. In addition to her exceptional Best in Show at Cavallino, 0619 also won another Platinum Award as well as the special Elegance in Motion prize at the Pebble Beach Concours. Concluding its entries for the 2021 competition, a third Platinum Award was received at the 2021 Ferrari Club of America Annual Meeting in Sebring.

Donnie Gould, Founding Partner and Principal Automotive Specialist, shares his thoughts on TdF; “The 1957 Ferrari 250 GT Berlinetta Tour de France is one of the greatest Ferraris of all time and this ex-Wayne Sparling example is an amazing car for a new owner, both for showcasing at events of elegance contests as well as speed tour. Now fully factory certified, this car is an outstanding example eligible for nearly every event on the planet. A very fitting feature offering for our first Monterey auction, we are extremely pleased to present 0619 GT to discerning car collectors in August.

The 1957 Ferrari 250 GT Berlinetta Tour de France will be offered at this year’s inaugural Monterey sale by Broad Arrow Auctions and will be featured alongside approximately 80 important collector cars. The sale is scheduled for Thursday August 18, please visit www.broadarrowauctions.com for more information.

Broad Arrow Group and its subsidiaries, Broad Arrow Auctions, Broad Arrow Capital and Collectors Garage represent the collective vision of its founders, team members and partners – to be the best advisor, marketplace and financier for car collectors, with integrity, confidence, and innovation. Broad Arrow Group is a holding company, founded in 2021 and headquartered near Detroit, Michigan, to develop and operate a portfolio of businesses and brands that serve the needs of various segments of the collector car market and to transform the industry collectible cars. Learn more at www.broadarrowgroup.com.