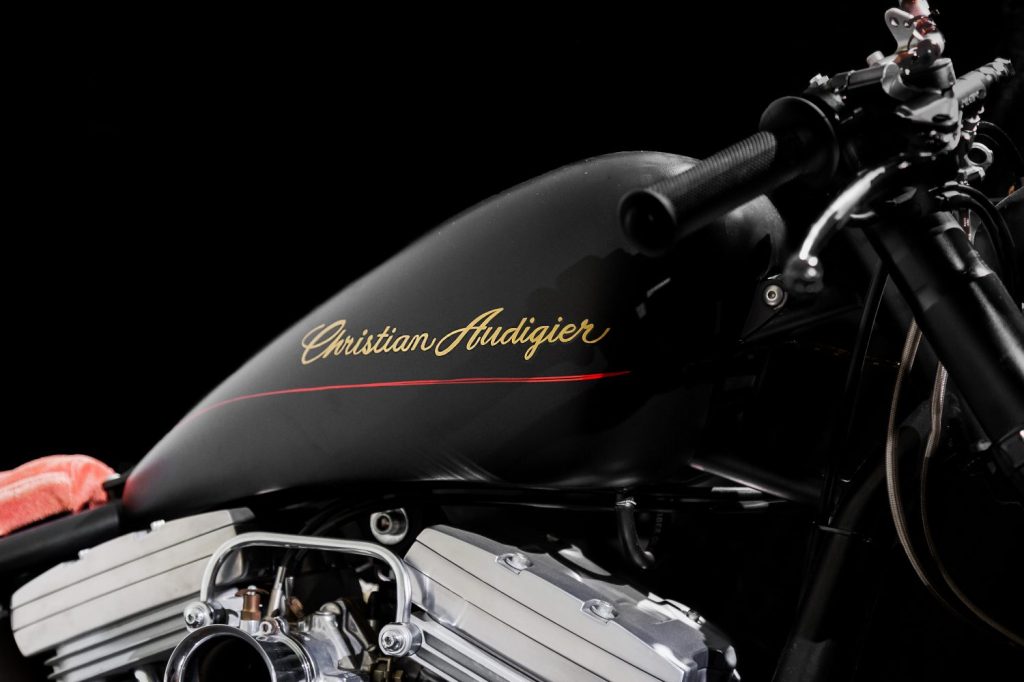 Christian Audigier, the sometimes outrageous flamboyant character who ran fashion labels Ed Hardy and Von Dutch, was just 57 when he died of cancer seven years ago in Los Angeles. But he left behind a tattooed trucker hat, graphic tee and embellished denim heirloom on LA fashion. And now his personal and diverse collection of art, furniture, books and clothing has been consolidated and is being auctioned off by Abell Auction Co.

“We had to sift through a lot of his stuff to tell a story,” said Todd Schireson, vice president of the LA auction house.

One of the most prized items in the catalog is a custom Bobber motorcycle designed by the legendary Yoshinobu “Yoshi” Kosaka, who owns a bike shop in the Los Angeles area called The Garage Company. “The bike has a certain look,” Schireson said. “Someone will appreciate the bike for the bike itself or someone will buy it who appreciates Christian Audigier and wants to keep it.”

Other important works include a large collection of paintings by Mr. Brainwash (Thierry Guetta) and numbered prints including images of David Bowie, the Rolling Stones, Michael Jackson and others. There are also lithographs and numbered prints by contemporary street artist Shepard Fairey.

Audigier, who was born in France, was a great friend and fan of French rock ‘n roll star Johnny Hallyday and collected some of his personal items, including a metal-studded leather jacket now mounted in an acrylic case.

The French designer, who reportedly worked with Michael Jackson on a clothing and accessories line, had a prototype sequin and crystal Jackson-inspired glove framed in a shadow box frame.

“Christian selected each item with exceptional care and passion and had a quintessential eye for fashion and design,” Vincent Audigier, his late uncle’s executor, said in a statement. “Nothing was random.”

Audigier worked with numerous blue jean companies before arriving in Los Angeles, where he began working with the Von Dutch label. He took this brand to new heights by teaming up with celebrities such as Britney Spears and Justin Timberlake, who often wore the popular Von Dutch mesh-back trucker hats in the early 2000s.

The French designer left Von Dutch in 2004 to start the Ed Hardy label, which took images of San Francisco tattoo artist Don Ed Hardy and incorporated them into different categories including t-shirts, dresses, handbags , jackets, swimsuits, shoes and even a vodka label.

The Audigier auction will take place online on May 12 and 13. A complete catalog of the collection will be visible on www.abell.com on April 29.