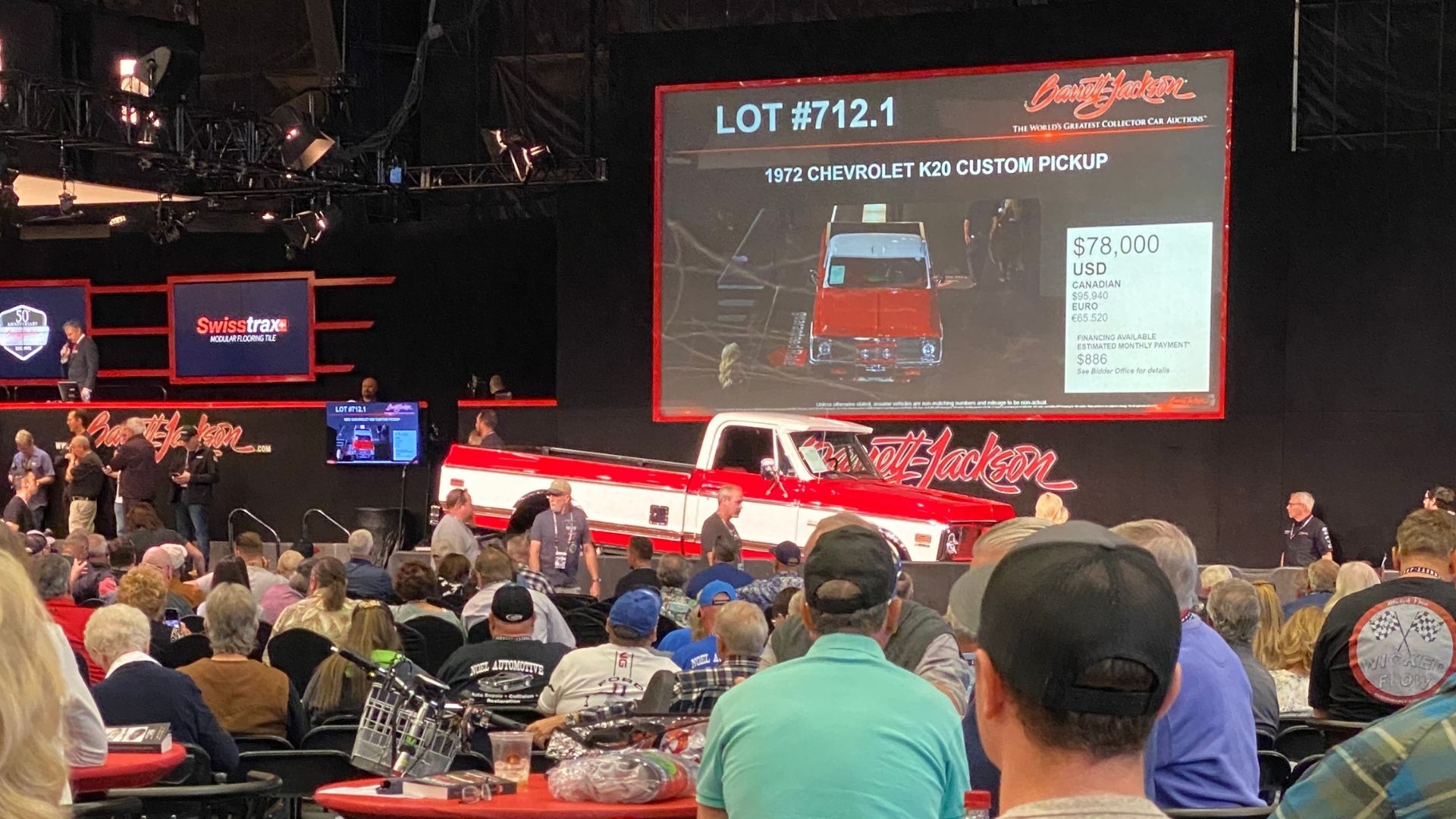 I resisted buying the jacket, but gulped down those hot donuts happily, with no regrets. Somehow they pair perfectly with reading rows and rows of gorgeous classic and new cars with a few quirks, like a muffler-shaped car and an Elvis tribute pickup truck with a furry blue dash . Barrett-Jackon’s PR manager tells me he has to be there at 5 a.m. to meet with the local film crews, eager to capture the wild, weird, and amazing cars on display, and every year it’s a little different. But it’s still a show in the best way.

Craig Jackson hadn’t planned to head the Barrett-Jackson auction house in 1995, but he knew where he was going. His vision of the Scottsdale auction as a great lifestyle event was built from hours of conversation with his older brother Brian, who had recently passed away quickly from colon cancer, the same disease that cost their father their life.

“Brian helped me solidify the vision we had for auctions in his final days – live TV shows, multiple locations and most importantly, sharing the passion we have for cars with everyone who attends an auction,” Craig said on the Barrett-Jackson site. “Brian also shared his knowledge of vintage racing with me – he passed just six weeks after Monterey Car Week in 1995. When I suddenly found myself holding the reins, I kept remind me of Brian’s words of encouragement: ‘You know what to do,’ he told me. ‘You always knew what to do. Do it.'”

What started as a celebration of pre-war cars when Craig’s father Russ Jackson started Barrett-Jackson in the early 1960s with his friend Tom Barrett has evolved over the years, and Craig is watching closely. the market to keep it fresh. When meeting Craig in his green room near the staging aisles, Craig told me that when he took over, he surveyed his clients to find out what they expected from the sales events at the auction, and he got a range of responses.

“Some of them were stupid, and some of them were painful, like, ‘You’re a little jerk and you’ll never be able to make it work.’ Alright, I’ll take that one with a grain of salt,” he said wryly. “Some people didn’t like me because I was stricter on the rules. I was tough on reservations on certain cars at certain levels, and as a result we sold more cars.”

Craig is a car enthusiast, as is his business partner and company president, Steve Davis. Craig himself is a hands-on executive and he walks on foot: for example, he learned how to do stripes with none other than Von Dutch himself. He is unquestionably a reducer; he even named his daughter Shelby.

It’s not just an auction, he says. There’s a commercial side to it, but it’s done with heart and soul, as evidenced by the series of charity cars they sell commission-free and the way they treat customers. Like a good mix tape, the Barrett-Jackson team reviews a variety of cars and trucks to appeal to different people. Of course, there’s an immaculate 2007 Bentley coupe owned by Poison frontman Bret Michaels. There’s also a blue AMC Pacer from the movie Wayne’s Worldwho is making his second appearance in Scottsdale.

“Everyone thought when we first sold the Wayne’s World car it was stupid money,” says Craig. “He almost doubled this time.”