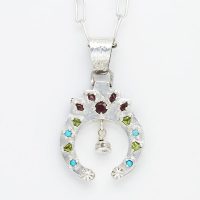 Every year, the Manufacturing Jewelers & Suppliers of America (MJSA) hosts a design challenge. Previously, applicants only submitted drawings. This year, the contest added a new physical dimension to the competition and, for the first time, a fundraising auction, with 100% of the proceeds going to Navajo Nation and its COVID relief efforts. 19.

The changes are courtesy of Columbia Gem House, a Vancouver, Washington-based gemstone supplier who has made responsible and ethical sourcing a cornerstone of its business. The company, which has sponsored the Design Challenge since 2019, donated materials to each of the six designers participating in the competition – Betty Padilla, Dana Bronfman, Dominique Larson, Donna Distefano, Helen Chantler and Jennifer Dewey – including a small weight of ‘money. , red garnets from the Navajo Nation anthill, Arizona peridot from the San Carlos Apache Reservation, and Sleeping Beauty turquoise from the surrounding area.

Designers were encouraged, but not compelled, to use the stones to create a consciously designed piece of jewelry based on a fictional invite about a young Navajo woman named Haseya Yazzie, who leaves her home in Wood Springs, Arizona, moves to New York, falls in love with an Englishman and returns to the reserve to organize a traditional Navajo wedding ceremony. The designers were asked to create “a special piece of jewelry that would honor Haseya’s legacy and give her a special connection to her home,” according to the MJSA website.

Voting on designs is open on the MJSA website until midnight on October 31. The Navajo Nation Relief Auction will be held at the Columbia Gem House site from November 1-7.

â€œBecause it’s about responsibility, it was a way to give all participants stones and metals and bring their pieces to life, then use them in a social way to support the community. Navajo, â€said Eric Braunwart, Columbia Gem House President and CEO. â€œWe get raw material from all kinds of places around the world and we work on different projects in some places, but in this case when COVID hit, Navajo Nation had the highest COVID infection rate of all. United States “

Natasha Braunwart, head of brand and corporate social responsibility (and daughter of Eric), said the Navajo community suffered “from a detrimental lack of resources” during the pandemic, including everything from PPE in hospital beds.

â€œEven getting people to a clinic was a problem,â€ Eric added. â€œWe asked ourselves, how can we support the communities where our raw materials come from? “

Columbia Gem House has sourced colored stones from the Navajo Nation for many years, primarily from trading posts. In 2016, the Braunwarts began working directly with a Navajo miner named Jaymus Perry.

â€œHe collects these gems in a very traditional way, because traditional Navajo people don’t leave holes in the ground,â€ Eric said. â€œHe combs the desert and waits for it to rain.

Natasha pointed out a video on the Columbia Gem House Instagram page in which Perry shows how he extracts garnets from the anthill, so named because the ants in the area will push the smallest specimens of these red chrome pyrope garnets out of their homes. and in the anthill. , where they are found ready to be discovered.

â€œYou find the small ones, and they serve as an indicator of where you are mining,â€ Eric said.

Once the auction is over at the end of the day on November 7, proceeds will go directly to the Navajo Hopi Help Foundation. While Columbia Gem House is still in the process of finalizing how the funds will be used, in particular, Natasha said the money raised will cover things such as purchasing gas cards for patients, handing out hand sanitizer and construction of awnings and benches so Navajo seeking clinical care have a shaded area to sit outside while waiting to see a medical professional.